Here are some pro tips for fighting the EITC!

There are 3 types of EITC and these are their characteristics:

This type of EITC can be found near Port Cities.

Normal EITC has men and resources, just like normal players

and you can obtain prisoners and resources if you successfully attack them.

After defeating them for the first time, you can keep attacking them over and over and obtain resources without losing any pirates.

EITC Forces that lost its men and resources will slowly recover them over time.

You will not be able to tell how many men and how much resources EITC has, just by looking at it

so scouting them before attacking is a must! 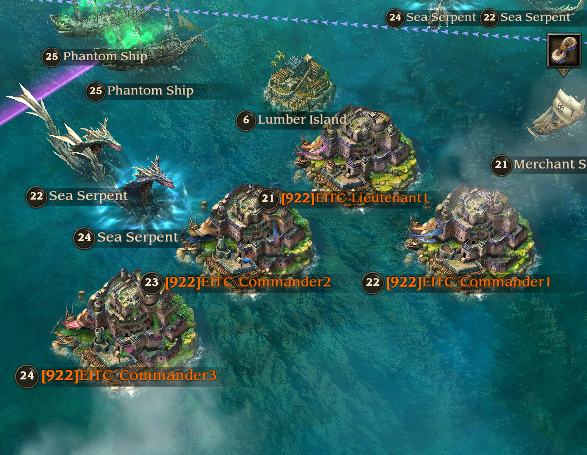 It shows up as red pins on Sea Map and appears near Alliance Fortresses every 2 hours.

As its Territory levels are higher than normal EITC, it is harder to defeat.

Lvl 27 and higher Powerful EITC Lv.27 will wield only a small number of prisoners

but you can obtain Speed Up along with resources when you plunder them!

Normal / Powerful EITC Forces can be easily spotted on the Sea Map,

which means other Captains can attack them at the same time you do.

But randomly appearing EITC aren't marked on the Sea Map.

You have a better chance of plundering them alone!

EITC are a valuable component to your Territory's growth.

Make sure you take advantage of them!