The War of Genesis - Battle of Antaria, Gear Guide

As all RPG Games do, having powerful gear is important in the War of Genesis as well. The difference in gear can change the outcome of battles. Thus, it is recommended to craft, upgrade, synthesize for good gear. The following guide explains what types of gear are available for your heroes and the recommended sets depending on the hero’s characteristics.

First, there are total of 8 hero gear sets. Depending on the number of same set gear equipped, the corresponding set effects will activate.

Increase HP by 15% for every 2 Fortitude set gear equipped. 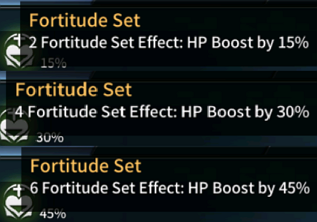 Fortitude set is useful for G.S., since his damage scales with HP. He can taunt enemies and take hits for his allies with his higher HP. Mharid, and Thad can heal allies better, because their heal scales with HP.

You can even give the Dark Prince Fortitude set gear to increase his shield when an enemy falls from his Heaven Break skill.

Note that Caliper Mage’s heals depend on the ally’s HP, rather than its’ HP. It isn’t a must for Caliper Mage to equip Fortitude set gear

- Since Attack Set effect activates once you equip 4 Attack set gear, you should equip other set gear to get an additional set effect once you benefit from Attack set effect.

(It can be argued that using Focus set gear and Deathblow set gear is better for dealing damage.)

Increases DEF by 15% for every 2 Defense set gear equipped

- You can increase your heroes’ DEF up to 45% by equipping all 6 parts of Defense set gear.

Defense set is useful for heroes that scale well with DEF. Some of the heroes such as Duran, Ereich, Arshia, and Claris do more damage depending on DEF and also improve their ability to take hits well.

- Heroes that benefit from getting DEF also are useful in Kashumir Joust, because the heroes are sturdy, and also have formidable damage.

Da’oh, 2 star hero, gains more DEF when he attacks, and has the ability to stun an enemy. If he is hit by a Near Miss attack, he gives a shield to all allies.

Arshia’s leader skill gives 24% DEF buff to all allies. His buff skill to increase all allies’ DEF makes him a mandatory hero to bring when forming a team using DEF in Kashumir Joust.

- Finesse Set increases the heroes’ SPD. Your heroes’ turns come more often the faster your SPD is. Faster SPD allows your heroes to act before your enemy heroes can. Try to act first and give your allies buffs or give your enemies debuffs.

In the early game, Druid is the only hero that damages depending on SPD. As you progress into mid and late game, you’ll be able to obtain a hero named Yil Ji Mae that utilizes SPD.

Finesse set can also be useful to other heroes that don’t scale with SPD.

You can also equip Finesse set to heroes with high base SPD such as Wolf, Strider, and Zik.. Finesse set will guarantee these heroes to take turns first

You can even equip Finesse set to heroes that can buff allies or debuff enemies to start the battle in your favor.

The strategy that focuses on SPD is also viable in Kashumir Joust.

You can bring Strider as a leader to increase all allies’ SPD by 8%, and make Lobel’s SPD as high as possible with his gear.

- You can increase your heroes’ Crit Chance up to 45% if you equip all 6 Focus set gear. However, you can get additional Crit Chance from each of the gear’s sub options and Gloves’ main option.

Because Crit Chance improves damage, it is useful to all damaging heroes. However, some heroes that gain additional effects from landing Critical Hits, such as Locarno, Assassin, Strider, Zik, Kaza, and Raymond will prefer to get higher Crit Chance from Focus set gear. 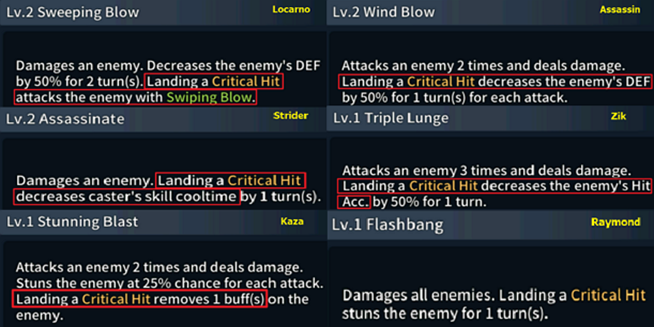 Moreover, heroes that have high damage skills such as Gapani, Eiolin, Wayne, and the Dark Prince can benefit from Focus set gear as well.

It is recommended to have at least 50% Crit Chance to make Crit DMG have a significant effect. Pair up Deathblow set gear with Focus set gear to make your heroes stronger.

Heroes that want to equip Focus set gear all benefit from Deathblow set gear as well, such as the Dark Prince, Locarno, Wayne, Eiolin, Assassin, Strider, Gapani, Zik, and Raymond.

Increases Skill Acc. By 15% for every 2 Accuracy set gear

- Accuracy set gear is useful to heroes that can give many crucial debuffs to enemies.

Having high Skill Acc. Can negate the enemy’s base Skill Res. and apply harmful effects to enemies.

Heroes with main skills that give debuffs will benefit from equipping 2 to 4 Accuracy set gear.

Lobel decreases all enemies’ DEF, and applies a random debuff at a chance. Lich blocks heal on all enemies. Ereich taunts all enemies

Increases Skill Res. by 15% for every 2 Resistance set gear equipped.

Even though negating enemy debuffs are good, but the set itself is very situational, and doesn’t have the overall benefit compared to the other sets.

It is because Resistance set gear become handy only when opponents apply debuffs, and it does not guarantee your heroes to block debuffs.

It may even be more beneficial to increase HP or DEF in the early game.

Even though Mharid’s passive skill allows it to heal all allies when Mharid resists a debuff, it is better to equip Fortitude set gear in many cases.

It is now time to delve into crafting equipment.

Currently, there are 1 to 6 stars on hero gear. Gear with more stars have better stats in main and sub options. However, the cost to synthesize and upgrade get more expensive as well.

To make equipment, you will need core and sub materials. 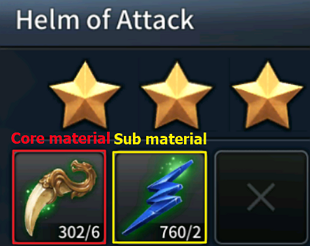 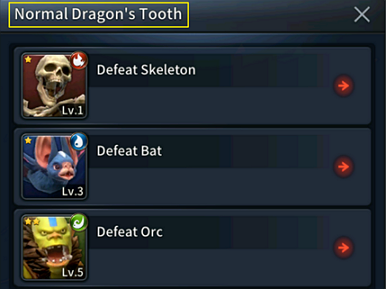 You can increase the number of gear to craft at one time by sliding the yellow bar on the bottom of the materials. Achieve higher VIP levels to increase the max number to craft gear at once.

On every crafted gear, you can get up to 4 sub options. Your gear will be fancier the higher the total number of options on your gear are. 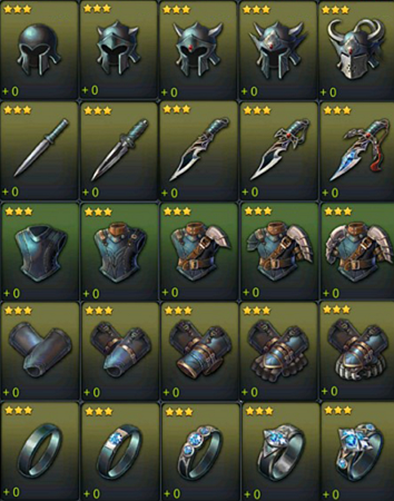 Moreover, each parts of hero gear have set pool of main options. However, you can get any stats on sub options. 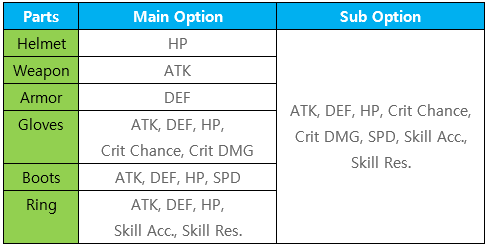 There are some stats will have both + and % stats, while others will have only + stat or % stat. It is better to have + stats in the early game, because heroes will have lower base stats. However, % stats will be more beneficial as your heroes become stronger, and as you get better gear.

Equipment options will scale using the base stats (indicated by white numbers) listed on your Hero Info. Stats listed in green are total stat boosts from the heroes’ gear and research.

As a result, you will want to have more % stats if you have high level heroes with high base stats. However, you would want to get + stats if you need to increase your heroes’ low base stats. 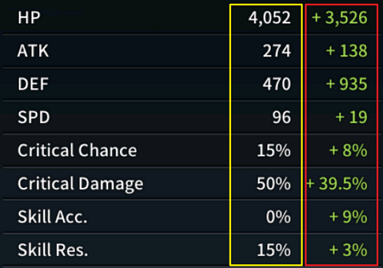 To craft the most optimal gear to your heroes, you should decide the sets and parts of the gear that you want to craft. Then, you will want to get the specific main and sub options on your gear. Before you start to craft hero gear, get as many hero gear materials as possible by hunting monsters.

Let’s say you want to make Armor of Fortitude for Mharid, you’d want to follow these steps.

It is very difficult to get all the options you want on your gear by crafting and synthesizing.

If you only synthesize gear with 3 to 4 sub options and sell gear with less than 3 sub options, it will be take much longer time to get all the gear you want for all the heroes you have.

If you want to equip decent gear to all of your heroes, try to use gear with 2 sub options as well!

Carrying on from the Mharid’s Armor of Fortitude example, follow these steps.

You can get the stats you want on your gear faster this way. 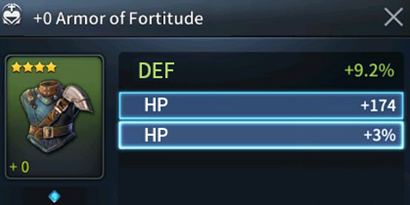 Let’s try to upgrade the armor above.

Excellent! HP% stat was upgraded twice! It can be faster and more efficient to make gear with only the sub options that you really need if you consider upgrading as well.

Of course, it is optimal to get all 4 sub options with stats that you want on your gear, but it will take very long time to make one. You also have to consider that there are total of 6 parts in gear. You also have a huge pool of heroes to utilize in the War of Genesis, so it is better to make decent gear quickly and efficiently. If you continue crafting your gear, you’ll eventually get the perfect gear that you want.

※ The contents can be updated and changed.