- Asura's 'Circle of Vigor' heals Asura's HP by 25%. Target the cubes first, since it takes longer to defeat Asura when your heroes don't focus fire.

- Asura's ' Sky Shaker'reduces all allies' DEF, and Asura's 'Fist of Shura'deals additional damage to allies with debuffs. Bringing Rashid can help, since he can remove your allies debuffs.

- The left side's Emerald Cube increases Asura's DEF. Bringing Eiolin can help, since she can remove buffs on Asura. 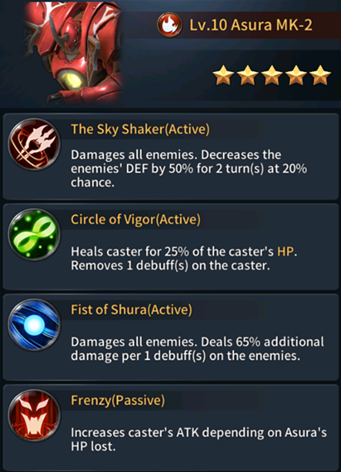 - Duran suits better in the leader position, since Asura has a type advantage against G.S..

- Bringing water type Eiolin for damage, and Thad or Mharid for heal can make the fight easy. However, fire, dark, and light type heroes are fine for this dungeon.

- Caution! You can only check the opponents in the final wave in the Formation. So if you only have water type heroes...

- It will be difficult to deal with Druid in Wave 1 and Strider on Wave 2. Bringing fire type Locarno, who has a high ATK, can deal with those wind type heroes.

- Rashid can also be used, since he removes debuffs on all allies and increases the allies' DEF.

- Eiolin's 'Furious Slash' removes enemy's buffs. Use it on Asura with DEF buff.

- Duran's 'Power of Light' decreases Asura's ATK. He'll be doing a great job as a leader. 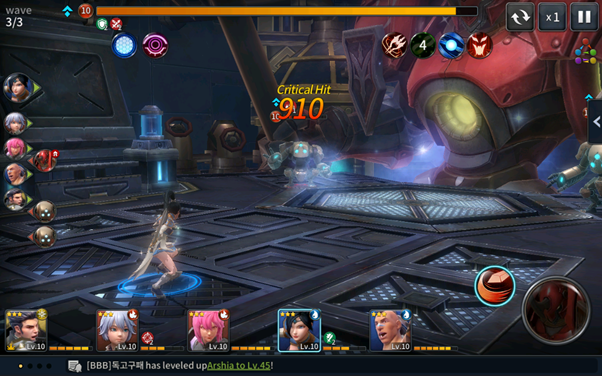 ※ Use Rashid's 'Cleanse' if your heroes have debuffs. 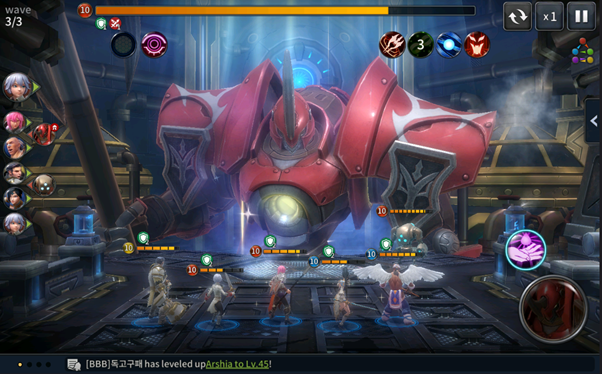 - El Gennaro is a boss that focuses on dealing damage. It doesn't have any skills to heal. It increases its ATK and attacks with skills that hit multiple times.

- It also deals damage over timeand decreases all allies' DEF. To make it worse, your heroes will take additional damage if they have debuffs.

- El Gennaro gets stronger as its HP is lowered. After it changes its type to dark type, it increases its Crit Chance and use 'Demonic Beam Cannon' every turn. 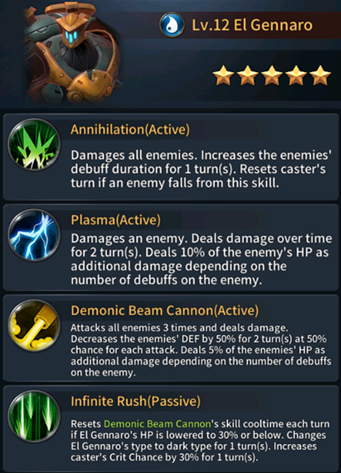 - However, be careful when using wind type Strider. When Strider is targeted by fire type monsters on Wave 1 and 2, then he will fall easily.

- Bringing Duran will be safer than bringing Strider. Duran will have a type advantage against El Gennaro after it changes its type to dark type. He can also decrease the enemy's ATK with 'Power of Light'.

- Bring Thad to heal, and Eiolin to damage. Eiolin's damage skills are great, since she can attack all enemies and remove the enemy's buffs.

- You can target Emerald Cubes first, but your heroes may find hard to withstand attacks from the enemies. It's better to focus on attacking El Gennaro.

-Use Eiolin's 'Fierce Swordsmanship' and 'Blade of Vengeance' when El Gennaro's has ATK buffs. 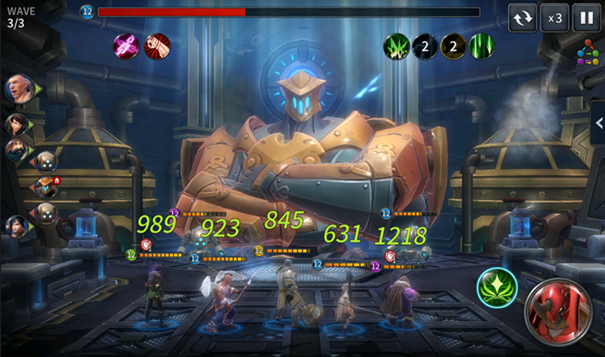 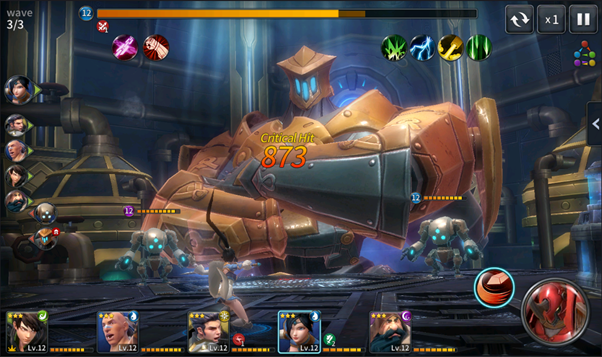 - Wind type Orc's 'Berserk Rampage' is useful against El Gennaro, since Orc has a type advantage, and the skill does more damage to enemies with high HP.

Use Asura's 'Asura Incendiary Blast' to decrease El Gennaro's DEF first, and use Orc's 'Berserk Rampage'. It can deal a lot of damage. 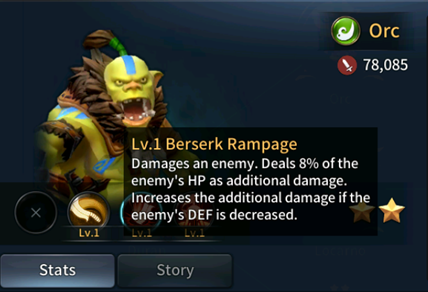 - Since Janus is a wind type machina, fire type heroes with damage will make the battle easy.

- However, the left side's Emerald Cube uses a skill to change its allies to water type.

- Also, Janus' 'Destructive Sight' is also a threat because it attacks all allies and heals depending on the damage dealt.

- Either increase your heroes' DEF or decrease Janus' ATK to reduce damage to your heroes and Janus' heal. 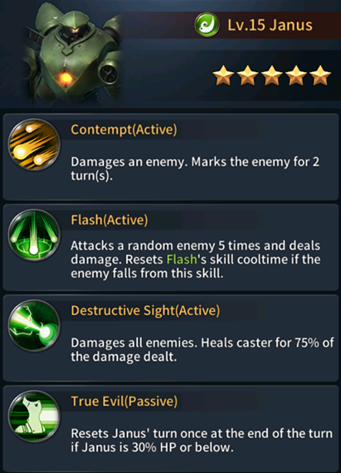 - It is better to bring heroes with high DEF. Bring Duran as a leader. Rashid's 'Cleanse' will certainly be beneficial.

- Bringing both Locarno and Wayne seems good on theory, but water type monsters in Wave 1 and 2 pose a threat.

- Bring only Locarno, since his high ATK and skill that decreases the enemies' DEF will definitely help. Bring both Thad and Mharid to heal.

- Unfortunately, there are only water type heroes that can heal at this point, and Janus has type advantages against the heroes. However, Thad and Mharid both have high HP, so they should survive fairly well.

- At the boss wave, target the left side's Emerald Cube first. Use Rashid's 'Cleanse' if your heroes' type change.

- Decrease Janus' ATK with Duran's 'Power of Light'. Use Locarno's 'Sweeping Blow' to decrease its DEF. Isn't it quite simple?

※ Janus damages all allies whilst healing its own HP. 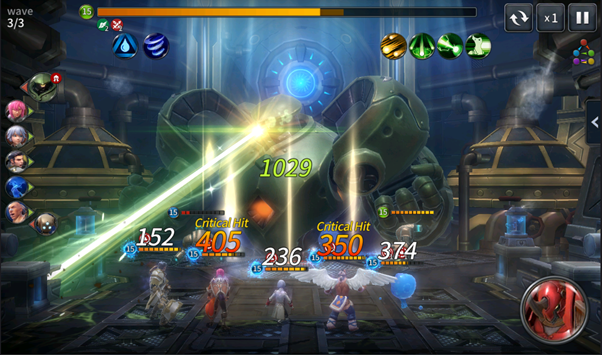 ※ Use Rashid's 'Cleanse' if your heroes become water type, and go back to being the original types. 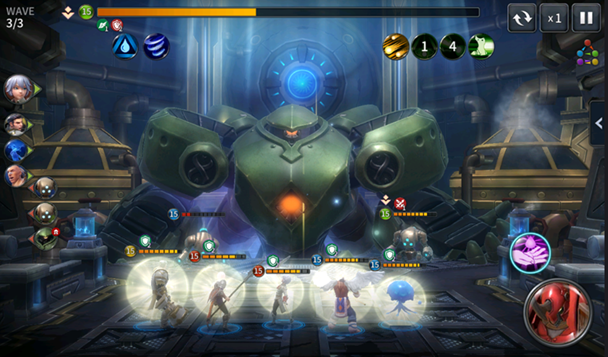 - Fox's passive 'Detect'reduces all allies' debuff turns by 1 turn at the end of Fox's turn.

Type change debuff from the left side's Emerald Cube lasts for 1turn , so you can ignore the debuff if you bring Fox. 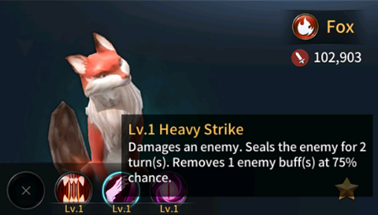 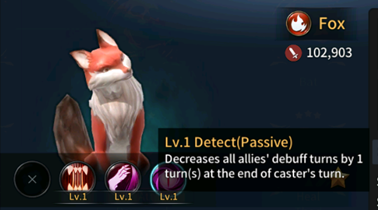 - Arbalest damages depending on DEF. Bring heroes that can decrease enemy's DEF.

- Above all, its passive skill makes the battle more difficult. When your heroes land Near Misses on Arbalest, it will counter with 'Repress' and delay your heroes' turns. It is a difficult passive to deal with.

- The right side's Emerald Cube changes all allies HP% to its HP%. If you only target Arbalest, then it will heal all of the damage back very quickly.

- Arbalest will lower your heroes' Hit Acc. and counter when hit by Near Misses... It sure sets up its skills well. 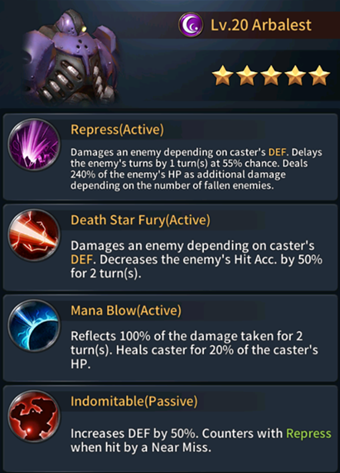 - As Arbalest is a dark type, there are no huge penalties in bringing various types of heroes. Bring Locarno to damage, since he can decrease Arbalest's DEF.

- Bring Eiolin, since she can remove the reflect buff on Arbalest. Locarno and Eiolin will be a great pair of heroes to damage Arbalest.

- When you enter the boss wave, target the right side's Emerald Cube first. It must have lower HP% than than Arbalest's to stop it from healing Arbalest.

- Decrease Arbalest's DEF with Locarno's 'Sweeping Blow'. Its damage and DEF will both be weaker.

- Wait for an opportunity to use Eiolin's 'Furious Slash'. You will want to remove the reflect debuff when Arbalest heals its HP.

※ Arbalest damages depending on its DEF. Lower its DEF to lower its damage. 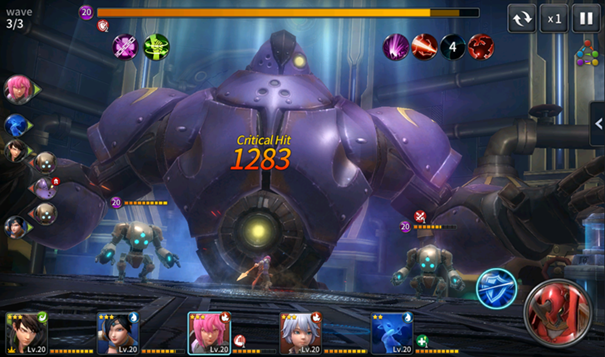 ※ Rashid saves the day by removing debuffs on all allies. 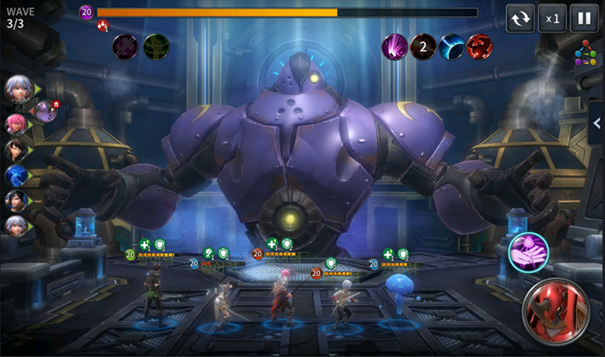 - Merman and Da'oh passive 'Scales'and 'Rock' will obtain Hit Barriers and shields to all of your heroes when it resists debuffs, or when it is hit by Near Misses.

Arbalest's 'Death Star Fury' damages all of your heroes 3 times and decreases Hit Acc. These two heroes in the same formation can reduce a lot of damage from the skill.

If you're lucky enough to resist the debuff, and be hit by a Near Miss, all of your heroes will obtain Hit Barriers and shields to reduce damage from Arbalest.

- Also, Da'oh's 'Confidence Up' damages depending on enemy's HP. It does a lot of damage in battles against machinas and other bosses. 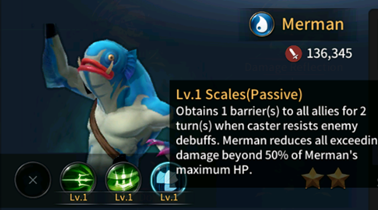 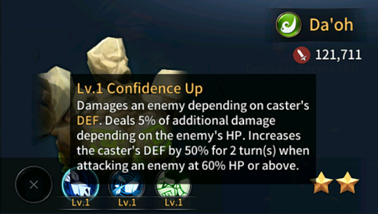 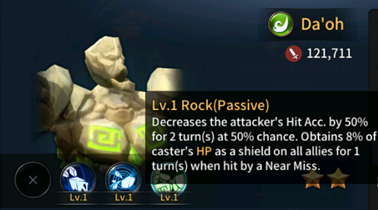 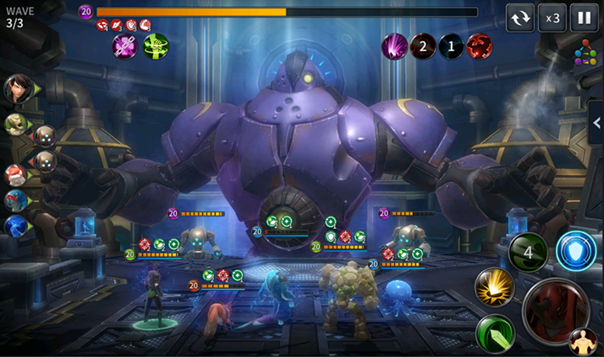 - Also, the right side's Emerald Cube gives all Alondite's debuffs to your hero. 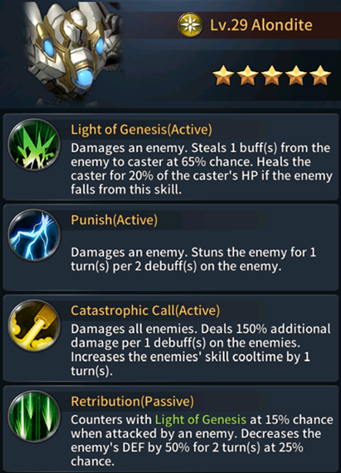 - Duran as a leader increases all of your heroes' DEF, and he has a high DEF.

- Bring Locarno to damage, and Erica to support his damage. Erica's 'Leafy Vines' delays Alondite's turn, allowing your heroes to do more damage before Alondite's turn.

- Mharid is always a good pick when you need to heal your heroes. It's a go-to hero to heal. Bring Gargoyle to support Mharid's heal and to sustain even better.

- If the right side's Emerald Cube has fallen, target Alondite and take him down. Use Duran to decrease Alondite's ATK, Locarno to decrease it's DEF, and Erica to silence.

- It's not a formation with a fancy strategy, but it works against Alondite's simple skill set.

Formations that have a good balance of damage, sustain, and heal will be appropriate against Alondite. 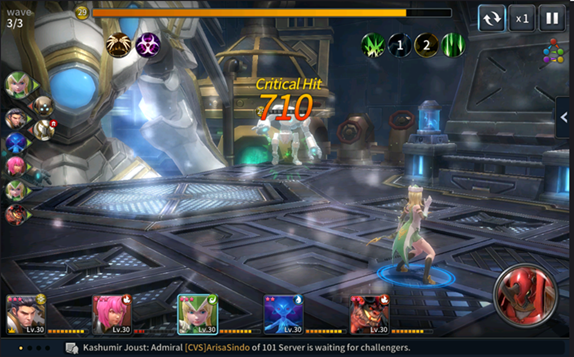 - By now, there should be a variety of heroes available to level up and train. Specific heroes synergize very well together, such as Wayne and Gapani.

Wayne's 'Depth Charge'marks an enemy . Marked heroes will take additional 3% of their HP as additional damage for each attack even if the attacks are weak. 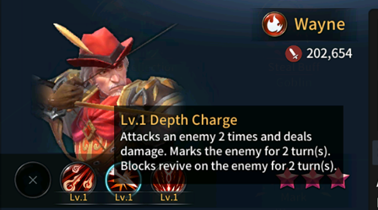 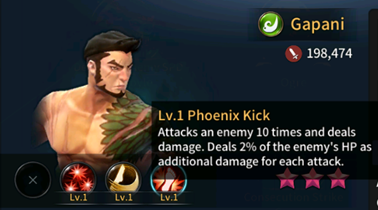 ※ Massive Damage! Before and after using Gapani's 'Phoenix Kick' against marked Alondite 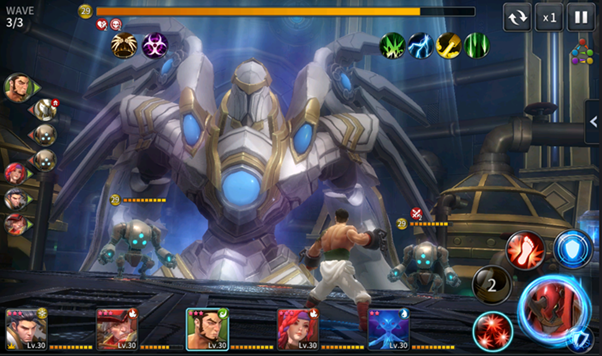 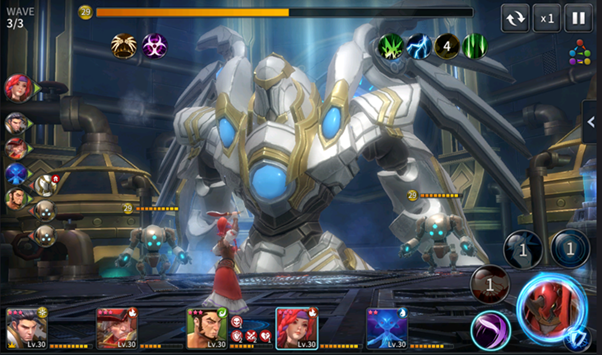