1.What is Ruins Conquest?

New Content “Ruins Conquest”, which many Admirals have been waiting for, is finally updated!

The objective of Ruins Conquest is to rally with your guild members to conquer the 4 cardinal points (Western / Eastern / Southern / Northern) of Ruins.

- The first conquest will begin 24 hours after the update.

: The first conquest will begin in “Western Ruins”, and the other Ruins will be updated soon.

- Once you unlock and watch the sub-story, you can access the content at Guild menu or in World Map.

- In the servers which will be opened after the update, Ruins Conquest will begin after 30 days.

To conquer Ruins, you must succeed in attack & defense for up to 30 minutes.

- If you select ‘Ruins Conquest’ icon at Ruins, you can participate in Ruins Conquest battle, and try to occupy Ruins. 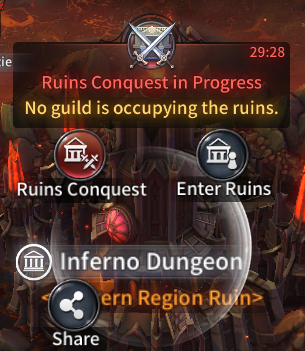 - Ruins Conquest will be done with rally attack, and only one rally attack can be done for each guild.

- According to Rally leader’s heroes, the result of Ruins Conquest battles will be decided.

: If the rally leader returns to the Airship, the rally will be disbanded and all participants will be returned as well.

- Occupying guild has to form defense teams strategically to defend occupying Ruins for 30 minutes, and the Guild who tries to occupy Ruins has to injure as many heroes as they can to make rally leader forced return.

- It requires 30 minutes to conquer Ruins and whenever occupying Guild is changed, it will be decreased every 5 minute and up to 15 minutes.

The reward of Ruins Conquest will be distributed according to Guild Contribution, and whenever you injure enemies’ hero, you can obtain guild contribution.

- Max. 3000 Guild Contribution can be obtained for each Guild Member.

Additional rewards such as a special title and airship skin will be given to the member occupying the Ruins, with the highest amount of contribution.